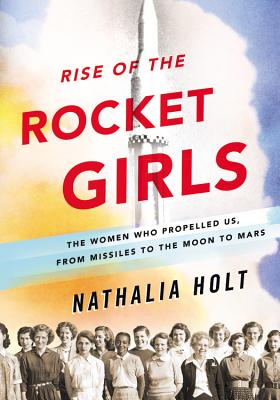 A typical twentieth-century complaint: “If we can put a man on the moon, why can’t we do X?” If we can put boots on a heavenly body, why can’t the first few squares of toilet paper rip clean? Why can’t we stop M. Night Shyamalan from making movies?

Yet the gripe only focuses on a fraction of the achievement: yes, men have gone to the moon, but who helped them get there? More importantly, was it only men involved in this historical undertaking? In Nathalia Holt’s Rise of the Rocket Girls: The Women Who Propelled Us, From Missiles to the Moon to Mars, the answer is clear: behind every good man is an even greater woman.

Holt’s book documents the rise of Caltech’s Jet Propulsion Laboratory, one of the earliest American pioneers of rocket technology. Beginning in an America fin de siècle, pre-World War II, Holt moves from the wildcatting years of boys and their rocket toys to the burgeoning aerospace industry taking root throughout Southern California that eventually helped propel the red, white, and blue to the moon and beyond.

Yet Holt doesn’t craft a dry piece of historical reportage. In fact, she approaches the story of JPL much like a historical novel, blending scholarship with a novelist’s eye for interiority and character. “Barbara thought of the family moments she was missing,” Holt writes, “but quickly had to focus and prepare for what they all hoped would be a history-making launch.”

Before Apple, before IBM, and before our modern definition of a central processing unit partnered with memory, a computer referred simply to a person who computes. Using only paper, a pencil, and their minds, these computers tackled complex mathematical equations.

The sciences are often perceived as a boy’s club, especially the sort of science that’s come to dominate the West Coast. However, Holt relates a different narrative, one where women were integral to an overwhelmingly male field. This was especially true at JPL, which almost exclusively hired female “computers” due to circumstances and a progressive, freewheeling company culture quite distinct from Army and NASA benefactors back east.

Holt is able to portray a mélange of 1950s femininity tropes—alongside the impending Second-Wave feminism of the 1960s and 70s that JPL straddled—in a clean, crisp, and amusing vein. Perhaps the position of these women computers is best summed up during JPL’s annual Miss Guided Missile contest, a laboratory-wide beauty pageant:

As odd as it seems by today’s standards, the beauty contest was a symptom of JPL’s progressive hiring practices. As the bouquets were handed out and an attractive woman crowned the winner, the contest was unintentionally highlighting the presence of young women working at JPL. After all, other laboratories would have found it impossible to hold such a contest in the 1950s; they simply didn’t hire enough women.

Beyond these little quotidian factoids of mid-20th century American femininity, Holt relates just how important these women computers were to the progress of space exploration during the Cold War. Her cast of characters, much like the decades of change JPL navigated, face changing expectations, marriages, pregnancies, and children in a larger culture that felt a woman’s place was at home. There’s also the looming specter of the computers we know today gradually taking over from these accomplished talents. Man versus machine is so passé. Woman versus machine is where it’s at.

While the melding of historical reporting and novelistic flourishes occasionally falls into an unsatisfying middle (not detailed or rigorous enough to be journalism, not compelling or imaginative enough to be fiction), Holt’s work is commendable, valuable, and essential, shining a light on an overlooked group of spectacular individuals in the overly mythologized, masculine era of “The Right Stuff.”

NONFICTION – HISTORY
Rise of the Rocket Girls: The Women Who Propelled Us, From Missiles to the Moon to Mars by Nathalia Holt
Little, Brown and Company
April 5, 2016
ISBN 9780316338929

Fervent Acknowledgements in “The Pull of The Stars”