In Blackass, A. Igoni Barrett Puts a Nigerian Spin on Kafka’s Metamorphosis 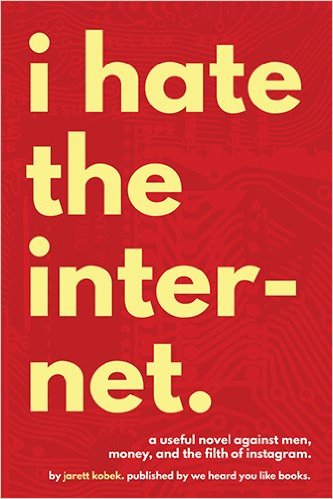 When he lived in San Francisco, Jarett Kobek had a front-row seat to the destruction of vibrant, diverse communities, wiped off the map by new construction. Of course, San Francisco being the city it is, most of that gentrification was funded and planned by the people who “own” the internet.

Kobek’s response: “an actual, genuine 20th-century nervous breakdown like a rummy drunkard from a shitty Scott Fitzgerald novel.” And also a novel of his own, I Hate the Internet, a brilliant, laugh-out-loud screed against the “overlapping global evils” that the internet represents, a furious manifesto dressed in the guise of fiction, about a San Francisco artist whose life is upended when a recording surfaces online of her doing the unthinkable. It’s an eye-opening look at the world we live in, where our lives revolve around devices made by enslaved children in China, and where the only thing we feel empowered to do about it is complain…via said devices.

I recently spoke with Kobek about writing, online harassment, and America in the information age.

Do you imagine America will ever recover from the ills described in the book, or is it too far gone already?

Yes, it can recover. There’s been a systemic campaign since at least the 1930s to deemphasize the perceived importance of government in favor of corporations, but the reality is that all societies are shaped by one of two things: (1) Laws. (2) The indifference of lawmakers.

Having been Bernie Bro’d at a recent event, it feels as if I should hold a grudge against Sanders, but I support his campaign despite the hooting and hollering of his drunken beatnik supporter. Even if he can’t surmount the challenges of this election (and who knows if he can’t), he’s pointing in the right direction. That’s someone who understands the function of laws.

All we need to save America is what everyone’s always needed from the dawn of history.

It’s a hilarious book. As a writer, why is humor important in the face of dire circumstances?

Depictions of the Middle East in film are always tonally wrong. Everyone’s always deadly serious, usually beneath the canopy of a nasheed. No one’s ever funny. Which is the exact opposite experience of being in the Middle East where nearly everyone you meet has the capacity to be really funny.

Why are they funny? I would imagine that humor’s the only sane response to living in misery.

I couldn’t help comparing Adeline’s story to the #Gamergate fiasco. Do you think Twitter and other platforms should be more aggressive about harassment prevention?

Arguments about whether or not harassment can be prevented miss the point of Twitter—the harassment isn’t a bug, it’s a feature. Advertising revenue is derived (in theory, as Twitter is massively unprofitable) from inflamed passions, because angry people come back to the site more, so if you’re operating these platforms, you want people as riled up as possible.

There’s a false dichotomy in assuming that there’s “good” and “bad” speech on social media. There is no speech on Twitter. Everything is product.

If these companies make efforts at cleaning up their platforms, be assured it’s not out of any commitment to fairness or civic spirit or human decency. It’s because there’s an inflection point when ISIS tweets out one too many images of beheaded Yezidis, and once that point is reached, conversation at Pacific Heights dinner parties becomes rather embarrassing.

Most writers in the 21st century are fairly dependent on the internet. What’s your relationship with it like in real life?

What kind of response do you hope the book triggers in readers?

Laughter, mostly. Maybe people will quit using social media. But not before they mention the book! Indulge my hypocrisy, hypothetical readers of the future, and then quit.

Also, I hope it inspires everyone to start using AdBlock. If you want a radical social change in America, all we need is for most of the country to AdBlock the shit out of everything. (And when you set it up, make sure you turn off the whitelisted advertisements.)

How much do you attribute America’s current polarized, anti-intellectual, anti-science political climate to the Internet and social media’s echo chamber effect?

I tend to think that American anti-intellectualism is a static state, or at least it has been since Andrew Jackson campaigned for the presidency between rounds of enacting genocide on the First Nations. The names and the influences change, but the plumb arrogant meanness never goes away. Social media’s main effect is to expose the world to those voices, unfiltered, whereas previously they appeared edited in the letters page of Time magazine or in private correspondences from the John Birch Society telling Dick Cavett to kill himself for being a heathen Jew homosexual.

Why write this as a novel instead of, say, a collection of essays?

Fiction lets you be irrational. There’s a conforming impetus amongst the readers of non-fiction—even those who agree with you—where everything has to resolve in a sensical fashion or else you sound like Alex Jones or Fox News era Glenn Beck. This has no relationship to life, which is nothing but an irrational stream of events with no narrative throughline until most of the people you love die and then you die too. So life’s grim and resists resolution and the three act structure.

Plus, the book really is a novel. It’s not been getting a lot of coverage as such—which I understand, since I shit all over the idea of the novel in the text itself—but there’s characters in there and they’re moving from one place to another. They’re living their non-life in the fifth dimension of imagination, trapped on the page, subject to the whims of the author and the occasional misinterpretations of the readers.

Is it too soon to ask what you’re working on next?

A semi-secret project not yet announced and a book about the Ol’ Dirty Bastard.