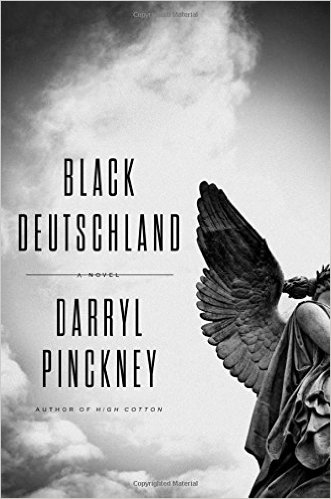 Inspired by the works of Christopher Isherwood, Jed leaves Chicago behind for Berlin in the 1980s, escaping the morass of racism and homophobia in his home country just as the AIDS epidemic gains national and international attention, and just as the city of Chicago falls farthest from its Civil Rights era promises of revolution and equality.

While reading Black Deutschland, it’s difficult not to make comparisons to Ta-Nehisi Coates’ Between the World and Me or Claudia Rankine’s Citizen. Pinckney’s second novel couldn’t have arrived at a more appropriate time in American history. A divide as solid as the Berlin Wall has always existed in our own country, and with it, a level of inequality that rivals former East and West Berlin.

After World War II, West Germany—particularly Berlin—has become a city of artists, musicians, and philosophers. “I wanted to get to Berlin, the chance to be another me,” Jed says. He and his cousin Cello both struggle with the pressure placed on them by their family to be exemplary in whatever field they choose. Cello, an accomplished female pianist, is a member of Berlin’s culturati and married to a German businessman. She has “good hair,” and her white, German mother-in-law has never once mentioned her race. She has abandoned Chicago completely and resents Jed for bringing remnants of it back into her life.

As in High Cotton (1992), Pinckney’s first novel, Pinckney mercilessly dissects the unspoken rules, boundaries, and expectations placed on African Americans who dare to achieve something. At times, Black Deutschland feels like a sequel of sorts to High Cotton. Both books examine the experience of Nina Simone’s “young, gifted, and black” generation.

Less of an achiever than Cello, Jed finds solace in West Germany, where the city’s problems are not his own. The war is not his war, and the violence is something he’s never experienced. “I wanted to live where the authority had little interest in black men,” he says, wandering the streets as a sober observer and seeking to belong, to escape the negative connotations of his race and nationality.

But he quickly finds that the very same traits that could hurt him in Chicago can protect him in Berlin. “I probably could have got away with petting a policeman on his head,” Jed says.

Jed finds a job working for a posh German architect whose latest project is the talk of the city. Jed navigates the city in a fog, observing everything but remaining on the outside, unknowable and untouchable. He walks the battle-torn streets of Berlin, offering a glimpse at the intersections of race, class, and gender struggles across cultures and national borders while shining a light on the universality of these problems.

In a sense, Jed’s immigration stems from a desire to find a home, but he doesn’t feel at home anywhere as a sober, gay black man. Instead, he finds himself constantly alternating between the roles of exotic ornament, charity case, and silent companion. He observes but does not touch, engages but finds no satisfaction, and probably spends 90% of the book describing the lives of others. There might as well be a concrete wall between Jed and the world around him.

Though Black Deutschland is complimentary to the groundbreaking books like Between the World and Me and Citizen released in 2015, Pinckney brings a new voice to the conversation. Through the lens of an outsider, he examine the walls and passes through them, almost unnoticed, but the echo of his footsteps will remain for many years to come.

I'm a writer who loves books only slightly more than movies. I write for print and video. Most of all, I enjoy collaborating with other artists. I'm currently working on my first novel.

Margo Jefferson and Darryl Pinckney on the Black Bourgeoisie