Top 10 Places to Read and Write in Chicago 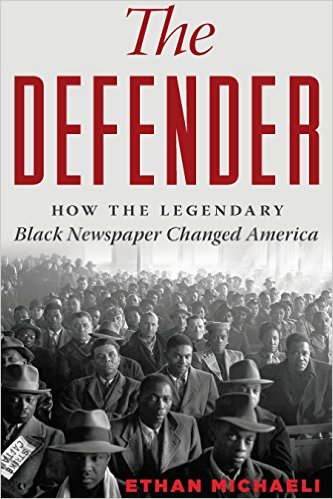 If those claims sound hyperbolic, read The Defender: How the Legendary Black Newspaper Changed America, Ethan Michaeli’s captivating account of the Chicago Defender’s history and its undeniable impact—physical, social, and political—on the United States.

From its genesis at the 1893 World’s Columbian Exposition to its post-war heyday and eventual decline, Michaeli’s painstakingly researched narrative isn’t just the story of a newspaper, nor of a single African-American community, but the story of the entire city, country, and century. It’s also the most compelling, readable book about Chicago history since Erik Larson’s The Devil in the White City.

Ethan Michaeli—who is Jewish-American—was a copy editor and reporter at the Defender from 1991 to 1996, where he covered politics, culture, crime and other topics in Chicago’s African-American communities on the South Side and Cabrini-Green. I recently spoke with Michaeli near his home in Bucktown about the impact of race on Chicago, writing The Defender, and being a reporter on the Chicago murder beat in the mid-90s.

In the book, you say working at the Chicago Defender changed the way you saw Chicago. How so?

When I graduated from the University of Chicago in 1989, I didn’t know anything about the city. I didn’t realize how much race had been an important part of the city’s history, and how race had made Chicago a pivot point for the entire country. Those were things I could suspect when I saw the beautiful abandoned buildings on the South Side. I thought, “There must have been enormous wealth and power here.” But it was only a suspicion. It never would’ve been cultivated had I not wound up at the Defender. It was a transformational experience.

How would Chicago be different today if the Defender had never existed?

If, let’s say, the Defender had existed in some other city, today Chicago would be more like Minneapolis or Detroit. There are plenty of cities with African-American communities, but what makes Chicago different is that it was a bastion of resistance to Jim Crow, going all the way back to the 1893 World’s Fair when Frederick Douglass planted that flag here in the city. Or maybe it goes back even further to when Chicago was known as a “sinkhole of Abolition” for its role in the Underground Railroad.

The book begins in 2004, when Barack Obama marched in the Bud Billiken Parade a few weeks after his now-historic speech at the Democratic National Convention. Why start there instead of in 1893 when the Defender was born at the World’s Fair?

It’s a way of starting at the end and working backwards. Obama’s presidency is the culmination of generations of work from African-American political activists, journalists, and everyday people who developed an infrastructure that was a key part of the American electorate as far back as 1919, when Carl Sandburg rated the African-American electorate in Chicago the strongest political body in the United States. Not the strongest African-American political body, but the strongest, period, that could swing not just mayoral but also presidential elections. It’s a very American story, a story of the vital democracy that’s always been a fundamental part of American life.

Most Chicagoans probably know about the Great Migration from Isabel Wilkerson’s The Warmth of Other Suns, but I had no idea it was largely a direct result of Robert S. Abbott‘s pleas in the Chicago Defender, which was sometimes literally smuggled into the South.

He saw immigration from Europe end with the onset of World War I, and he saw unions starting to lower their barriers as they needed workers to meet the demand for war materiel in Europe. Still, he was pretty mild in his support of the Great Migration until he saw stevedores in Jacksonville, Florida leaving en masse, causing a work stoppage and damaging the economy of the whole region. He saw Southern white authorities going crazy, trying to stop African-Americans from leaving, recognizing that their skilled labor was essential to the job…that’s when Abbott shifted. We’re talking about 1916, 1917, that’s when he started to support the migration as a manly, patriotic act of resistance.

What was the hardest part of your job as a reporter at the Defender?

The murder beat was very hard to get used to, emotionally, because there were over 1,000 homicides a year in Chicago in those days [Editor’s note: For comparison, there were 488 in 2015]. I saw bullet-riddled dead bodies every week. It was a very jarring experience. It was hard to process why it was happening and why it couldn’t be stopped.

What’s the most surprising thing you learned during your research?

What surprised me the most was how violent and overt the South was in its oppression of African-Americans. This wasn’t a subtle, clandestine, coded type of activity. They were waving the flag of white supremacy and calling it white supremacy. Something I wasn’t able to include in the book that lingers with me is when Benjamin Tillman, a South Carolina politician…

I grew up in South Carolina…

So you know who Benjamin Tillman is?

So you know his nickname was “Pitchfork Ben,” and you know when he was elected governor of South Carolina, he declared it a victory for democracy and white supremacy. It’s awful, obviously, but it’s interesting intellectually when you see people linking these two concepts. He was very much in the majority of how people thought, not just in the South, but across the country at the time. That was hard for me to process, and explains things you see today. You see the effect of that era on this era.

Considering the Great Migration led to redlining—and the once-great daily newspaper with a national circulation of over 300,000 has shrunk to a weekly, online-only publication—is the story of the Defender a tragedy when you look at it long-term?

Oh, no. A biography is almost always a tragedy—unless the person’s really hateful—because the ending is sad. The person dies. But an institution isn’t the same thing. An institution is people coming together. With the Defender, before I finished the book I asked myself, “Do I predict its demise? Do I think it’s going to disappear?” And I realized the answer was “No.”

This brand name of “Defender” will exist as long as race remains an issue. I firmly believe if the current ownership were to sell the brand or go under, someone would pick it up and start publishing the Defender again, because there is still a need to defend those rights which have been putatively given but are always being eroded, and which would be taken away if some people had their way. So it’s that spirit that I think keeps the Defender animated and means that it can never die.

What are you writing next?

I’m still interested in the intersection of race and history, but my next book will be on an international scale.