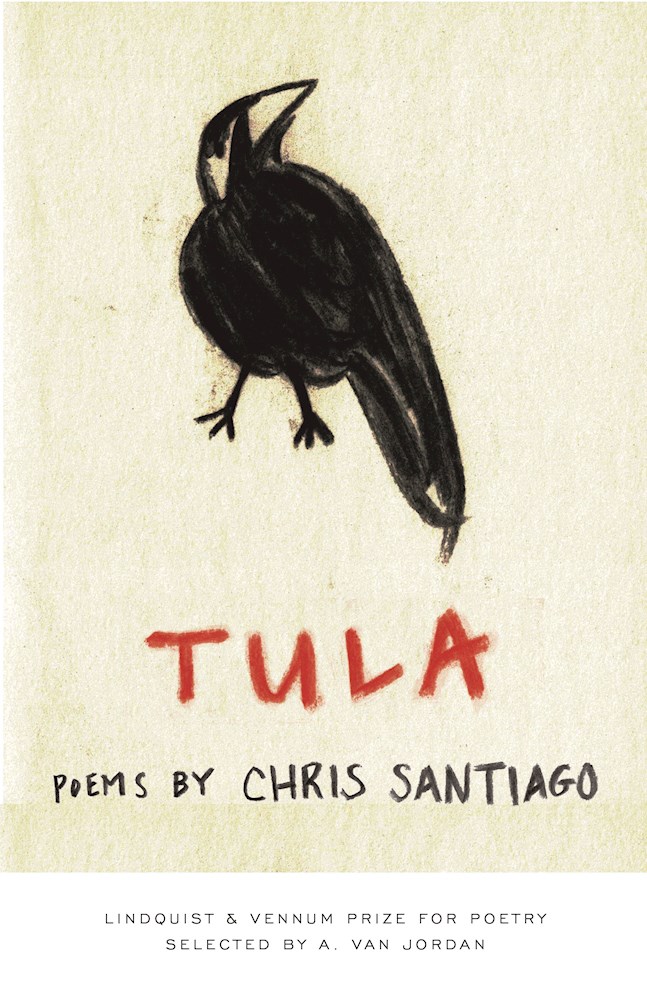 In the foreword to Chris Santiago’s mesmerizing poetry collection, Tula, a definition of the one-word title is given. Its etymology is complex: it can mean birdsong, music box, bellflower, or tributary, a physical item or something more abstract, all depending on the language. But perhaps most importantly, “tula” in Tagalog means “an aporia,” or “a poem.”

It’s noteworthy that “tula” can also signify an irresolvable expression of doubt, because this collection grabbles with both the large and the small, that which is absolute and that which remains beyond our grasp. The title further encompasses another duality found in these poems: their plurality–i.e., the collection’s amalgamation of individual verses—and also their singularity, as the poems cohere into an impressive monolith. Individual poems are also named “Tula,” a choice that emphasizes the relation between the collection’s wholeness and its distinct parts.

On yet another level, the title points to Santiago’s play with language. It underscores the fact that poems are subject to wide-ranging interpretation, that language is an imperfect vessel for many creations—even poetry. Tula stretches this realization to the microcosmic by allowing the nuances of syntax and diction to shape how words appear on the page–and by extension, build a world in which time and space can be transcended. For example, in “The Silverest Tongue in the Philippines” Santiago writes:

I can hear my uncle muttering
in the stillness of his cell.

He has the sharpest tongue in the Philippines.

It’s why His Excellency the President hates him
& why his doomed brother
worships him.
I can hear him all the way
from Bloomington,
wheedling inside cowrie shells,
in the ice buildup in our gutters.
I won’t be born for years
but my ears are preternaturally sharp.

Here the tongue exists physically and metaphorically, but what’s more interesting is how the poet so naturally falls into his uncle’s point of view, as if he, too, were in the cell, while at the same time far away–perhaps even nonexistent. This layering is a fascinating structural decision, because it brings into consideration a paradox: words themselves are needed to explain language as a weapon.

Additionally, it balances the physical and abstract. Concrete objects anchor the personal and geopolitical themes. Together, these decisions allow the poems to express both isolation and a means for coping with it.

Tula is filled with many musings on communication: the coos of mysterious birds, the awkward bodily discussions surrounding the loss of virginity, the rude expectations Americans have of immigrants to blindly embrace English. The title word’s many meanings speak most emphatically to that last point by exemplifying the many different ways one word can be interpreted—and the need for those multiple definitions to exist.

Santiago also reflects in detail on the immigrant experience and the confusion of never feeling quite at home. One of the many poems that shares the title states:

a foreigner
a spy

although I’ll have come at last
to my native land.

Time itself alters the way these lines are interpreted. Depending on current and future events, this passage may read differently today than it does in ten, even fifty years. Yet, the feelings it evokes of exclusion, sadness, and fear are timeless.

Santiago seems to recognize that words will always hold power, even as their meanings evolve. Through everything, Tula delves into these nuances of language: how it is suppressed, how it is weaponized, how it loves, how it informs, and how it is often as fleeting as a birdsong. Tula is therefore a celebration of the ephemeral and the permanent, a lovely testament to the beauty of contradiction.

Chris Santiago is the winner of the 2016 Lindquist & Vennum Prize for Poetry. He teaches at the University of St. Thomas in St. Paul, Minnesota.

The Reverberations of Desire in “Gods of Want”

Murders for Salvation in “Carnality”