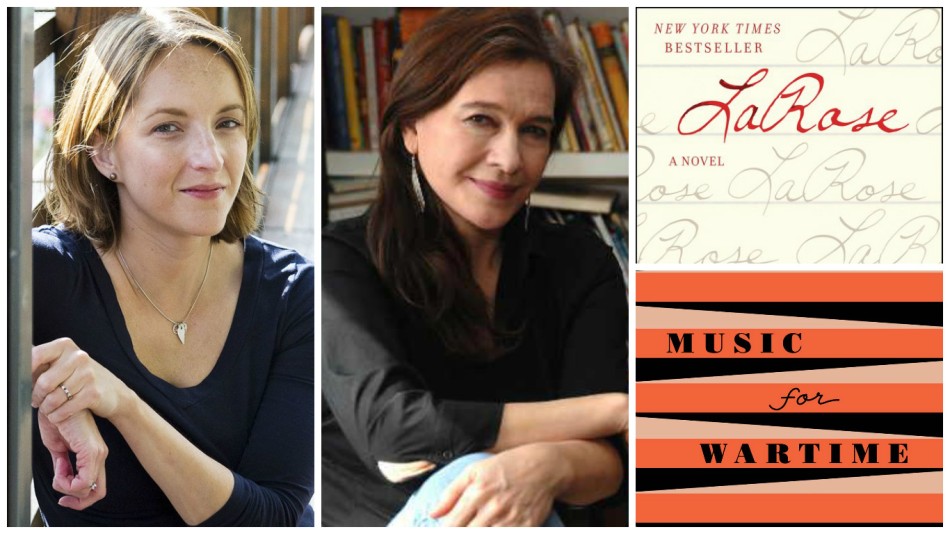 As a child in North Dakota, Louise Erdrich‘s father gave her a nickel for every story she wrote. It turned out to be quite an investment, as Erdrich has since won a National Book Critics Circle Award (for Love Medicine), a World Fantasy Award (for The Antelope Wife), and a National Book Award (for The Round House), among others. Like many of her previous books, Erdrich’s new novel LaRose returns to the Native American cultures of the Upper Midwest.

On May 24, the Chicago Humanities Festival hosted a conversation between Erdrich and Chicago author Rebecca Makkai (Music for Wartime, out in paperback this month). They spoke about Erdrich’s interwoven narratives, writing in multiple perspectives, and why Erdrich would never want to be a “beloved writer.”

Rebecca Makkai: LaRose, your new novel, takes place in the same world as some of your previous novels and short stories: the fictional town of Pluto, North Dakota, and the reservation next to it. And you’re getting a lot of Faulkner comparisons for this. In my mind, I’m thinking about Richard Russo. Are you thinking now on a sort of Balzac level about all of your books creating one bookshelf-sized novel, or what does that collectivism mean to you? What would be lost if you were setting each book in its own manufactured place?

Louise Erdrich: Your question is something I’ve really been thinking about a lot. Are these all connected into one big novel?  I think at some point I’m just going to actually write about my hometown and really get into what the history is there, because I’ve tended to like books where you can walk in places where the characters have walked. If I could go back and rewrite them, because I really want them to have the voracity and the humor and the substance, I want them to be the most they were meant to be. Because sometimes I feel like I just let them go too quickly. So I am working on something like that, but what it will turn out to be, I really don’t know. How can I know?

Louise Erdrich: I don’t think you are. I think you’re supposed to work in the dark, that the search and the writing itself is the reward. I don’t know if you agree with this, that what you’re doing day-by-day is the beautiful part of it.

Rebecca Makkai: Yeah. I don’t know who it was about, but I’ve heard the story of an author who lost a steamer trunk on an ocean voyage that had a manuscript in it, and someone said, ‘Well, why don’t you just rewrite it,’ and she said, ‘Because I know how it ends.’

Rebecca Makkai: You write from an omniscient point of view, a sort of sweeping, fast-paced omnisicence that moves the plot. And I’ve been obsessed with it. Who is pulling this off at a time when most writers have buckled into close third-person, or third-person head-hopping between characters, chapter by chapter?Rick Moody claims that the reason we don’t do omniscience anymore is because God is dead, which I probably shouldn’t say on stage in a church. So I’m curious first of all, if you have a sense of why so many writers have moved away from omniscience in the 20th century when you haven’t? Why does this suit your work so well when for so many other writers it feels clunky or overbearing or old-fashioned?

Louise Erdrich: Well, I’ll say right away that although I have this great education and I did go to a writing program … nothing really stuck with me. I don’t know grammar, I don’t know what these terms are, I can’t think about them, I don’t make those choices. In fact, my daughter will attest that her teachers would send her home with her grammar in middle school and would say ‘get your mom to help you’ and she’d say ‘pfft—forget about that!’

I really don’t write with those decisions in mind, and I really don’t have any theories about literature in general. I have these stories, I have these characters, I have the sense of voice that I get. It’s not that I’m not making intellectual decisions, I know I’m making a lot of them, and so when I’m writing in this voice, I’m doing it because all of a sudden I’m swept away with it. And I think it’s because being a reader, and someone who absorbs by osmosis everything that I’ve read even if I don’t remember it very well, it’s in there somewhere. So when I start something, and I’m thinking, ‘this voice is working, this voice is working,’ then I keep going with it. It’s simply because I’m being pulled along by a character. The thing that stops me after a while is I become too serious or too and I have to reassess what I’m doing.

Rebecca Makkai: Your narrative voice encompasses the past, the future, folklore, any character’s thoughts at any time, and it reads as a huge confidence in your own voice.

Louise Erdrich: I think that’s something that comes as you grow into being who you are. I do have confidence in my writing. It’s not always in myself, my own judgments, but I have a faith in the writing.

You really are the book you’re writing. Now that LaRose is all done, I’m not getting my predictions filled. I’m not putting the words together anymore. It’s for you, it’s not for me anymore. Here’s a book, I hope you like it. There’s a tremendous satisfaction in working on this particular trilogy.

Rebecca Makkai: Mary Gordon in The New York Times wrote that “Perhaps the most important of Erdrich’s achievements is her mastery of complex forms. Her novels are multivocal, and she uses this multiplicity to build a nest, capacious, sturdy and resplendent, for her tales… Woven into the specificity of these narratives is Erdrich’s determination to speak of the most pressing human questions.”

Her choice of words really resonated with me, words like mastery, sturdy complex, important, and to that I would add sweeping. But many other reviews of your work in general rely very heavily on the words lyrical and beautiful … which are true, but I wonder if you see that as I do: as a bit gender-related.

Louise Erdrich: I do, and I’m so glad that you caught that. You’re right. That is what women get. We get the lyrical, we get illuminating.

Rebecca Makkai: Sometimes it’s ‘a romp.’ [laughing] I don’t know if you can call LaRose a romp …

Louise Erdrich: But I do love that, and I think that’s it’s because [Gordon] is at the point where she’s powerful. She’s a powerful writer. One of the things I’ve always fought off is becoming a beloved writer. [ laughter ] I have! Once you get to be at a certain level of mastery, you get to be beloved. That’s something that I don’t really care about. Beloved author? Why is that important for me to become? It’s not. You want to read a book with blood. A lot of it.

2 comments on ““You Are the Book You’re Writing”: A Conversation Between Louise Erdrich and Rebecca Makkai”